Cooperation and the Bloom of Diversity
fontsize： S M L The springboard of language can foster mutual understanding and respect. Literature helps confirm self-identity through self-expression. The subsequent profusion of literary activities has a strong and positive role to play in dissipating the curse of internecine competition and conflict. Starting from the perspective of “my group,” authors unveil the diverse richness inherent in the inner being and invest themselves in fostering mutually supportive intergroup relationships to nurture a strong and healthy literary tree able to bear fruit for generations to come. Authors of different ethnic backgrounds join as one to nourish and expand the literary profession. Bridging old and new and motivated for the common good, authors engage in active dialogue that inter-pollinates and introduces diverse opinions and perspectives to set the literature of “us” on a solid footing with positive momentum into a future of benefit to all.

My Writings, My Voice

Since the 1920s, literary historians have led a concerted effort to collect and publish folk songs and stories from around Taiwan. From the 1980s, democratization, grassroots promotion of traditional folk culture, and tribe efforts to revive Malayo-Polynesian language use led to the creation of myriad culture-oriented groups, magazines and new literary honors. A common thread throughout has been calls for a restoration of and respect for Taiwan’s distinctive ethnic and cultural traditions. Movements are rooted in folk ways and traditions, relate local histories and encourage the telling of life stories in local languages.

The Literature of Family

Facing a society of multiple ethnic polarities, authors can draw on familiar life experiences, describe their own search for family roots, and observe the complex multi-ethnic tapestry in their own DNA to uncover origins and understand differences. Authors ultimately reconstruct the “self” and their spatial existence to foster life and plant the seeds of enlightened reflection on the threads of history that bind us all together that will sprout and flourish for generations to come.

The Literature of “Us”

forbid such. They open their hearts without prejudice to all Taiwan authors who have come before to create a forum for discussion and creativity. Their goal is cooperation. During difficult times, visionary authors step to the fore to send cool, pure water to “our” shared literary garden in hopes it will bloom again to take the literary arts to new and greater heights. 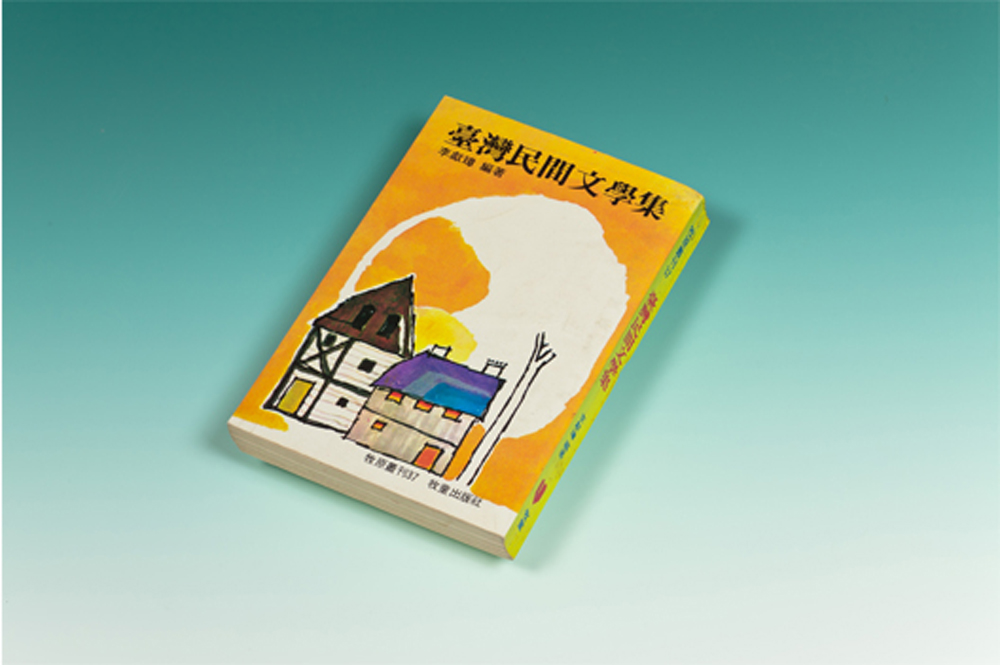 Lee Hsien-chang (1904-1999) was an author from Daxi in Taoyuan County, Taiwan. Lee spent part of the 1930s recording and writing down folk stories and songs from around the island. He compiled nearly one thousand songs and 22 stories into his Collection. He continued his research, becoming a strong advocate for valuing one’s own literary heritage over the empty ogling of foreign authors and literary traditions. 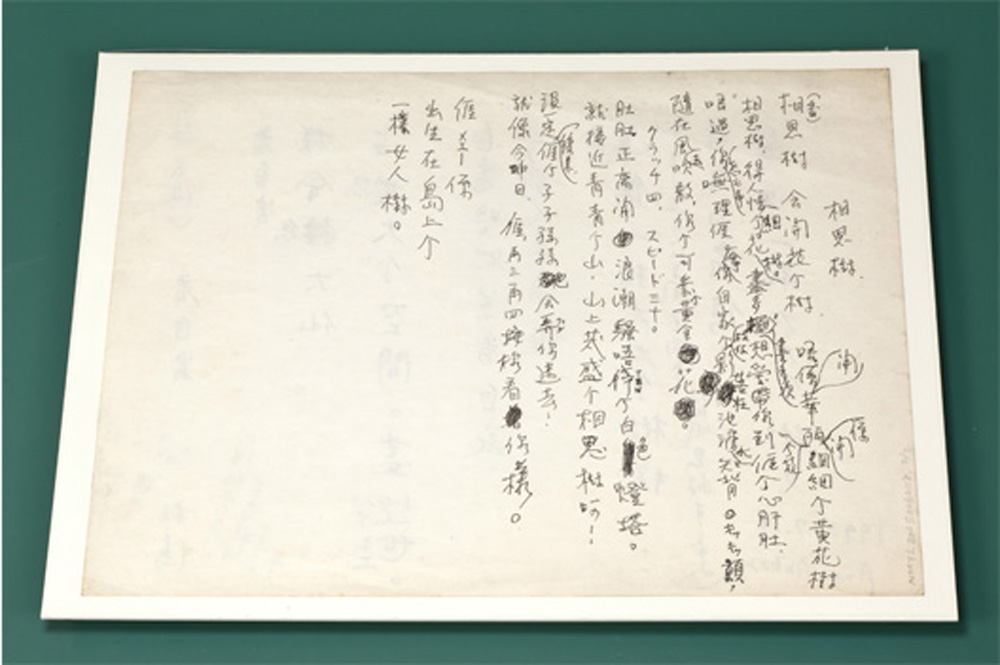 Tu-Pan Fang-ko (1927 - ) is an author from Xinpu in Hsinchu County, Taiwan. This manuscript of her Hakkanese poem “The Acacia Tree” eloquently illustrates the poet’s creative process. An accomplished writer of Japanese prose prior to 1945, Tu-Pan experienced a spiritual self-awakening in her native Hakkanese (a dialect of Chinese) after the Second World War, and she reoriented her creative output into this new medium. The rustic scenes of traditional Taiwan described in “The Acacia Tree” are metaphors for aspects of the author herself. A bridge between two linguistic ages, Tu-Pan uses poetry to pass island culture forward to new generations. 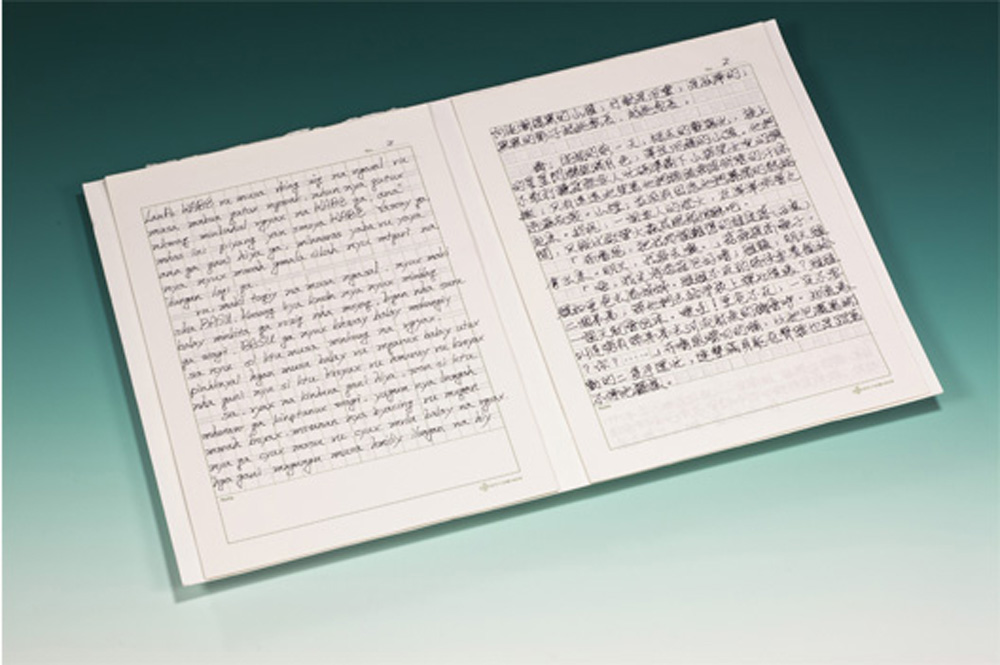 Walis Naqang (1967 - ) is an ethnic Atayal from Heping in Taichung County, Taiwan. Walis completed Atayal Footprints during the 1990s in side-by-side Atayal (romanized script) and Chinese. The novel narrates a moving story that highlights the vital spirit of the Atayal people. 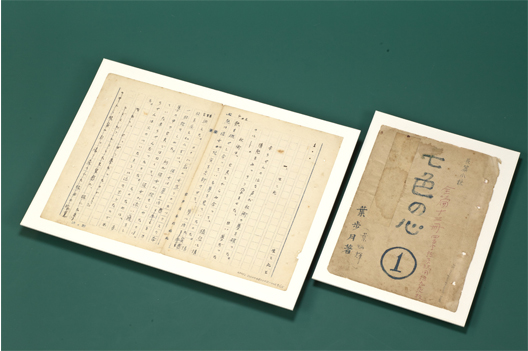 Yeh Pu-yueh (1907-1968), aka Yeh Ping-hui), was an author from Taipei City, Taiwan. He completed this epic novel in the 1960s. The Seven-Colored Heart follows the story of a Taiwanese family through three generations, highlighting their myriad and complicated cultural conflicts and the bittersweet rise of the main protagonist to social success and status.

1960s; manuscript; donated by the family of Yeh Pu-yueh 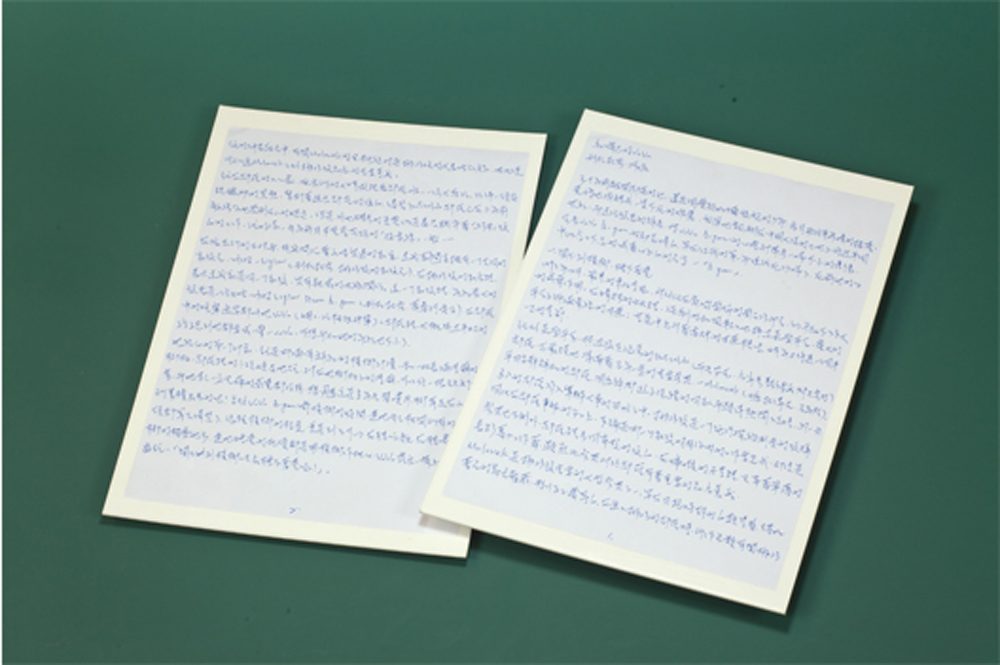 A-wu Liglave (1969 - ) is an ethnic Paiwan from Pingtung County in southern Taiwan. VuVu is a Paiwan term of affection for the elder women in the community. This book narrates stories of life that highlight the Paiwan love of life and Paiwan determination to remain a tightly knit community. 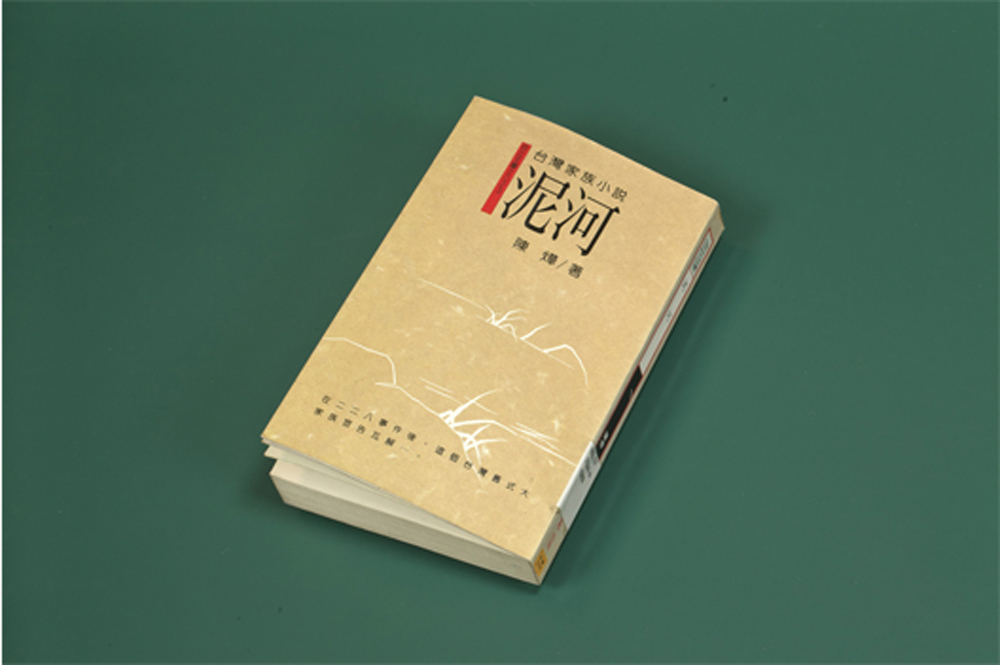 Chen Yeh (1959-2011), aka Chen Chun-hsiu, was a native of Tainan, Taiwan. River of Mud narrates the three-generation saga of the Lin family of Tainan. From the Japanese Colonial Period through to the postwar era, the book’s protagonists experience the tumultuous flow of history and several of Taiwan’s seminal historic turning points. Published in 1989 just as Taiwan finished disassembling Martial Law restrictions, it was one of the first works of literature to directly address the so-called February 28th (228) Incident and the ensuing years of White Terror. 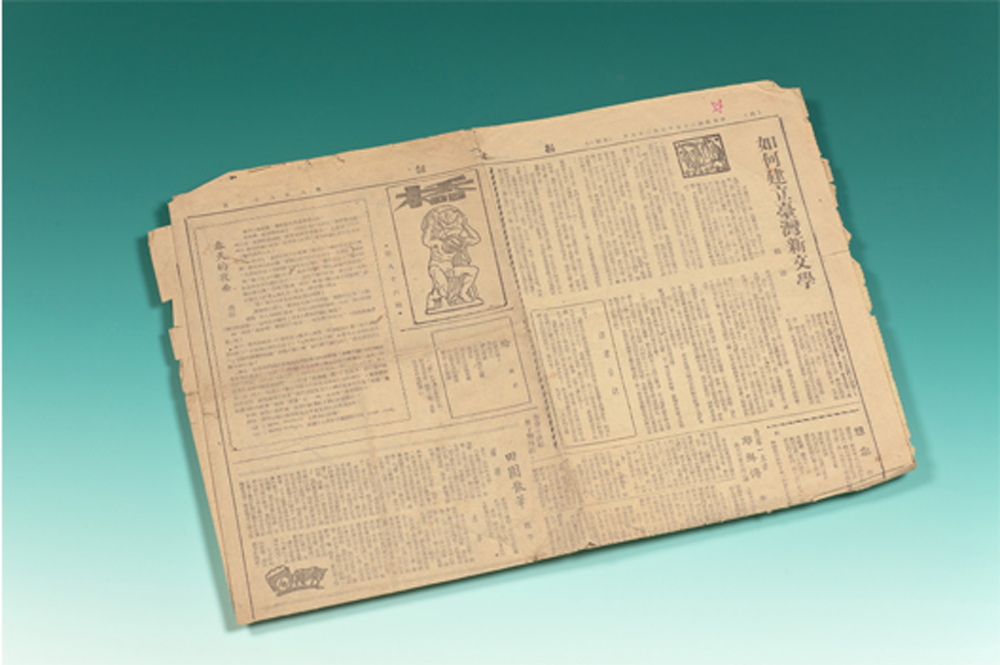 Launched in 1947, the Shin Sheng Daily News’ “Bridge” supplement carried these opening remarks by its chief editor Ko Lei. Ko wrote, “‘Bridge’ symbolizes a passing of the torch from old to new, a transformation from the exotic into familiar friend. It is a new horizon of fertile potential. ‘Bridge’ symbolizes the opening of a new era.” The supplement was intended to bridge local literature into the new postwar era, and stressed conciliation and cooperation in the work ahead. 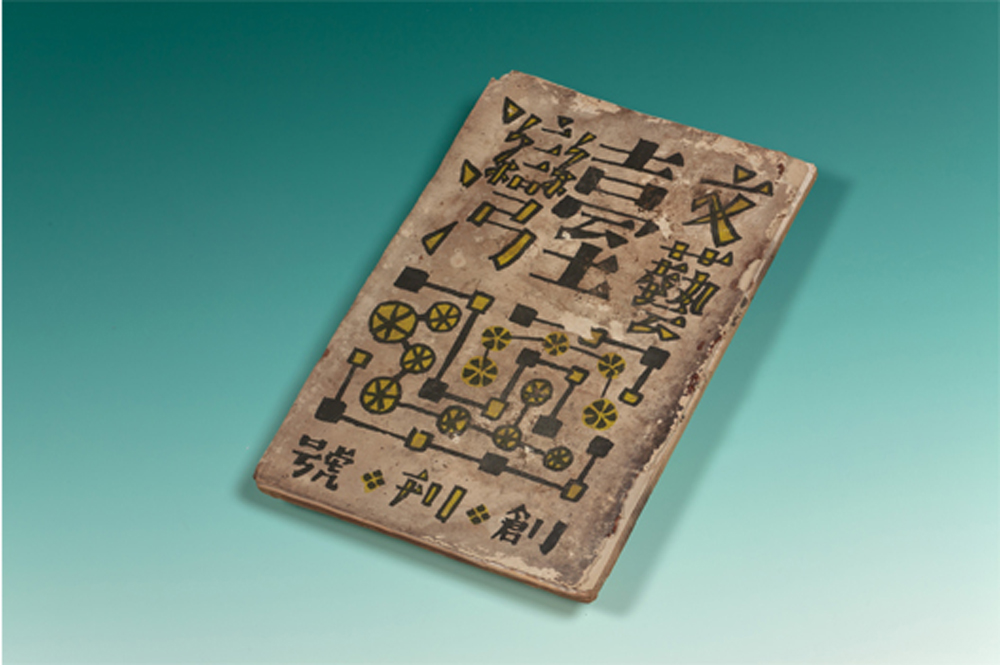 Bungei Taiwan published its first issue in 1940 under the editorship of Mitsuru Nishikawa. With the goal of growing to become a “focal pillar of Taiwan culture,” the journal attracted a sweeping array of short stories, poems, theatrical scripts, haikus and tankas from both Taiwanese and Japanese authors. Later issues devoted increasing space to literature related to conflict and the ongoing Pacific War.

Chi Pang-yuan (1924 - ) is an author from Tieling in Mainland China’s Liaoning Province. This original manuscript is one chapter from Chi’s work, Raging River. From the 1970s, the author began devoting her time to translating Chinese literature into English, opening Taiwan literature to the world. Her efforts have been crucial to developing and growing Taiwan’s increasingly rich literary dialogue with other nations and cultures.